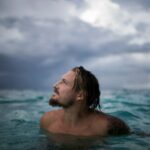 All Posts
Like all art, it is interpreted differently for different people, but overall my aim is to make the viewer “feel” something. It doesn’t necessarily always have to be a nice feeling, just some kind of emotional impact.As far as the impact of what’s being viewed… It would be my worst nightmare for the ocean to become a floating garbage patch. It scares me to think that our grandchildren might not be able to appreciate the beauty we take for granted.Although my images display a lot of power and force, the ocean is extremely delicate, and it’s transitioning through the greatest challenge of modern times – pollution.I hope the viewer is inspired to put nature over convenience as far as plastic goes, so we can keep the ocean as pristine as it can be…I have been the recipient of the prestigious ‘Follow The Light Grant’ (2009), placed 1st, 2nd & 3rd in the ‘Australian Surf Photo of the Year’ (2012), Semi Finalist in the ‘Moran Portraiture Prize’ (2012) named ’Emerging Sport Photographer of the Year’ (Capture Professional Photography Magazine 2013) Runner Up ‘Ocean Geographic – Pictures of the year’ (2013), Placed 1st in the ‘California Academy Of Sciences – Big Picture Awards’ (2014), Portfolio Of The Year ‘The Inertia’ (2014), ‘Overall Winner’ and ‘Best of Show’ in ‘The Ocean Art Photo Competition’ (2015), Shortlisted Finalist of The Terry Oneill Photography Award (2015), 1st Place ‘Australian Surf Photo of the Year’ (2015), ‘Juror’s Award’ – ‘The Center for Fine Art Photography – USA’ (2015), Shortlisted Finalist for the prestigious ‘Smithsonian – Annual Photo Contest’ (2015). Winner ‘American Aperture Awards’ – Landscape/Seascape/Nature (2015).My work has been featured by Vogue, Wired, New York Post, Yahoo, CNN, ABC (USA), ESPN, The Australian, Huffington Post & BuzzFeed and can regularly be found in Art, Lifestyle, Sport and Photography Magazines around the world.My Seascapes have been exhibited in galleries and museums throughout The United States, Europe, The UK and Australia.
PrevPreviousWinner Underwater 13°edition
NextHonorable Mention Underwater 13°editionNext