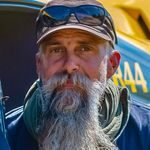 All Posts
“It takes passion, experience and skills, the right gear, respect, good nerves, a lot of patience and a bit of luck to get that one perfect picture. Sometimes I have to wait for hours in the heat of the day (we’re talking 40° and more) or sit in the car at night to download pictures since it’s too hot during the day for the computer to work properly. But there’s no better feeling then to capture that one magical moment where all the factors are right. The golden hour of the sun, dust in the sky, animals in action right in front of you and you being exactly where you want to be.”Jens CullmannIt’s a passionAs long as he can remember Jens Cullmann loves photography. He was born in the famous ‘summer of ’69’ and grew up in Nürnberg, Germany. When he was 13 years old, he got his very first camera, experimented with black and white films, developed each film himself, did a lot of trial and error and wrote every tiny thing down in a little book where each picture got a scale and explanation.The passion never left and in 2003 he discovered wildlife photography on a holiday in Africa. What started with a proper dose of wanderlust, a rental car and two weeks of vacation, soon became a lifestyle, a passion. Two years later he drove his own car on a road trip from Germany all the way down to South-Africa. The car stayed there and he kept coming back, already for thirteen years now. In the beginning he traveled all over, but the last couple of years it has been mostly Zimbabwe and Botswana. You will find him mostly in places like Mana Pools, the Kalahari and the Okavango Delta. Animals in action are his trademark and no one has more patience (as long as it concerns animals) to get that one right shot.Only in 2016 he decided to take it a bit further and so he had his first multimedia show, and participated in several photographic competitions. He became Botswana Wildlife Photographer of the Year (international category), was runner-up in the category mammals (Oasis – Internatioanl Award of Wildlife and Nature Photography 2017) and in the Scottisch Natural Heritage Photography Competition (Isle of May 2016). Besides that several photos of his will be shown in the African Geographic Yearbook of 2017.In January 2018 he will have his first exhibition, called ‘Dust Till Dawn’ in Heidelberg (Germany).
PrecedentePreviousVincitore Mammiferi 13°edizione
NextMenzione D’Onore Mammiferi 13°edizioneSuccessivo