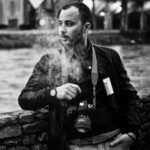 All Posts
Antonio Gibotta, class 88, immediately approaches and is passionate about photography, closely observing the work of his father, a well-known professional photographer. He soon transformed his passion into a profession, accumulating a considerable amount of experience in the creation of works and travel reports, in Italy and especially abroad. He manages to carve out his own photographic identity, which obviously suffers from his strong personality. At the center of his objective are man and the relevance of social issues. A new interpreter of the reportage (and not only …) and of his deepest feelings: crudity, poetry, dreams, the purity of images that can directly reach the heart. He graduated in Art Master, Art section of advertising graphics and photography, has exhibited in almost 130 countries. In 2010 he obtains the GOLDEN CAMERA AWARD from the Federation European Professional Photographer reportage category, then he obtains three qualifications “QIP” “QEP” “Master QIP” and “MasterQEP”. At the prestigious PRIX DE LA PHOTOGRAPHY PARIS, it ranks 2nd in the “PRESS” category. In France at the Eté des portraits 2012 he ranks first in the Reportage category. It is his most voted photo by the Fiof jury, at the “Canada International Digital Photography Award” he ranks 3rd. In 2013 Al FIOF is elected photographer of the year, at the same time obtains a Bronze Award at the ‘China International Photographic Art Exhibition’, at MyWed, the Marriage contest which was attended by over 3000 photographers from all over the world ranked 24th place. At the FIOF Awards Nikon Contest 2014 and 2015 he was elected “FIOF – Wedding Photographer of the Year 2014” and Absolute Winner FIIPA 2015. The most important Fine Art photographic company in the world, the “Hahnemühle”, chooses one of his photos to promote the new Matt fiber paper 200 grams. National Geographic inserts a photograph of it in the book “Stunning Photographs”. In 2016 he obtained the 3rd place in the Picture Picture category of the year international in Colorado category Feature Picture Story and 1st place in the FIPA Italy International Photography Awards in the Reportage category, 1st in the Reportage Movie Awards category and 2nd in the History category, always in 2016 one of his stories is among the 21 multimedia stories exhibited at the 5th LUMIX Festival for Young Photojournalism in Germany, in February 2017 he ranks second at the World Press Photo in the people category, at the MAGNUM PHOTOGRAPHY AWARDS 2017 he gets the Jurors’ Picks, he wins the PDN PHOTO ANNUAL and second place at SIPA AWARDS. In 2018 he ranks second to the Sony Professional Competition in the discovery category, and is among the five finalists of the Finalsit at W. Eugene Smith in Humanistic Photography.
PrecedentePreviousRunner Up Gente e Popoli 13°edizione
NextMenzione D’Onore Gente e Popoli 13°edizioneSuccessivo